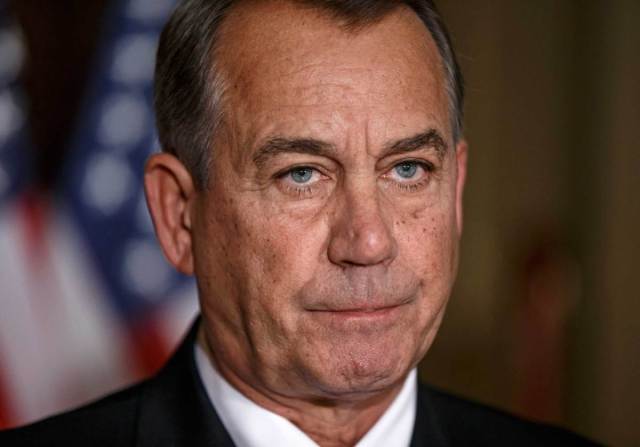 The House squeaked through a $1.1 trillion bill Thursday night with only hours to spare before a midnight deadline that would have shut down the government.

On the House floor, the vote tally—219 to 206—was watched as closely as the scoreboard in the final minutes of a hard-fought game after the initial scheduled vote was postponed for seven hours of arm-twisting, including a plea from White House chief of staff Denis McDonough to House Democrats. Congressmen ordered Armand’s and Papa John’s pizza when it became clear they would have to stay for dinner.

“Merry Christmas,” said Ohio Republican Rep. Pat Tiberi with more than a trace of faux enthusiasm after Washington’s worst holiday tradition was over.

There was a significant chance that the bill wouldn’t have passed, forcing a short-term, months-long patch. As it became clear that the Republican-controlled House was short of the votes, Obama and Vice President Joe Biden began calling wavering House Democrats. At the same time, House GOP leaders whipped the rank-and-file members they needed.

If the two sides couldn’t cobble together a majority by midnight, the government would have temporarily run out of funding. “I don’t think there’s going to be a government shutdown,” White House Press Secretary Josh Earnest told MSNBC as the sun set on the Capitol with no agreement in sight.

The last-minute scramble to pass a spending measure called up unpleasant memories of the past several years, when Congress has repeatedly edged right up to deadlines to pass stopgap legislation. In each case, the legislative branch managed to skirt disaster—until last fall, when the Republican Tea Party faction forced a shutdown in an effort to gut the Affordable Care Act. That 16-day shutdown damaged the GOP brand badly, and its leaders promised to sidestep a sequel.

But members of both parties found things in the omnibus bill to hate. Liberal Democrats, like House Minority Leader Nancy Pelosi and Massachusetts Sen. Elizabeth Warren, oppose provisions that would raise the maximum donation that wealthy individuals can give to political parties, as well as another that would provide government backing to some derivative trading measures like credit-default swaps. On the right, some conservative Republicans oppose the bill because it doesn’t defund Obama’s executive actions on immigration.

As a result, Thursday’s logjam caught many in the capital by surprise. Should a shutdown occur, it would have almost surely been short-lived. But the lack of support forced Republicans leaders to delay a planned vote.

“I’m not sure we have the votes,” said Rep. Robert Pittenger, a North Carolina Republican mere hours before the vote. “I do wish that President Obama and Nancy Pelosi would read off the same page.”

The White House urged Democrats to back the bill. “Democrats should be on board,” Earnest said, arguing a short-term spending resolution would leave the party with “even less leverage.” That message was reiterated in the McDonough meeting, which took place for over an hour in the basement of a Capitol annex.

Rep. Eliot Engel of New York said Thursday afternoon that he had been urged by the White House to support the measure. “Do you throw the baby out with the bath water or don’t you?” he said. “I think that’s what we’re all grappling with.”

The Office of Management and Budget held a call with executive agencies Thursday to discuss preparations for a possible shutdown, which officials believed was unlikely. But Congress still had to pass a short-term bill to push back the government shutdown deadline two days so the Senate would have enough time to pass the bill, as expected.